What are the benefits?

In Germany, only publicly appointed and generally sworn translators are authorized to provide certified (a.k.a. notarized) translations. These translations are accepted by virtually all authorities worldwide, including courts, regulatory authorities and competent authorities for the recognition of foreign professional qualifications, university diplomas and many more.

Tip: Hire a translator publicly appointed and sworn in by a German court to translate your documents. Only about 5% of all translators fulfill these requirements. Susanne Henke, a medical and legal translator with 20+ years of experience, is one of them.

Authorities in Germany regularly reject translations purchased from other providers. The fact that these linguists may have been sworn in by a court outside Germany is of little interest in such cases.

German courts require sworn translators to have passed a state examination or hold a university degree in translation sciences in their respective languages. 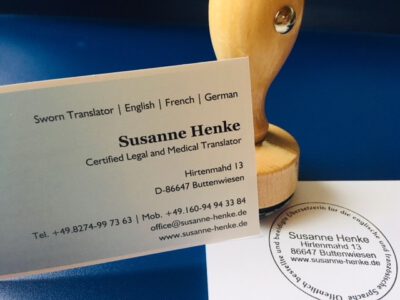 Sworn translators are entitled to endorse the translated document with their official stamp and signature as well as the following notation:

Sworn translators are sworn to secrecy pursuant to § 189 Sec. 4 German Judicial Systems Act and must faithfully and dutifully translate the spoken or written text into the target language.

Certified translations into German are always complete translations of the source document, including crossed-out words or notations without direct reference to the document, if applicable. Fee stamps, stamps or seals are also translated. Extracts are not accepted by German authorities.

Are you looking for a sworn translator?

Let us bridge the language gap for you. We have been specializing in providing linguistic assistance to the medical and legal communities for decades. Here is how we can support you: